Historic Soulard is one of the oldest, and best known parts of St. Louis!   Home of the World Famous Anheuser-Busch brewery, and known for its Mardi Gras, Octoberfest and night life, the Soulard area is an amazing transformed urban living oasis!

Soulard is also known for its historic homes, built mostly between 1850 and 1895.   These charming brick homes and townhomes are very popular!   With its amazing walkability and its close proximity to downtown and the other parts of the City, Soulard is a sought after community to be a part of . 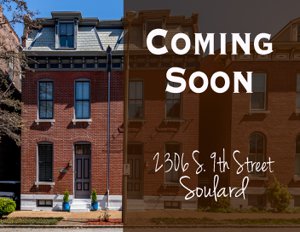 $375,000
3 Beds ⋅ 3 Baths ⋅ 22073674 MLS ⋅ ACTIVE Status
Stunning fully remodeled three bedroom home in the heart of Soulard! All new everything! The open floor-plan on the main floor comes complete with a brand new kitchen including stainless appliances, breakfast bar, and all new cabinets to create the perfect entertainment space that could be the envy of all your friends when you host them for Soulard's famous Mardi Gras Parade! The master bedroom suite encompasses the entire third floor! This home can be the perfect AirBnB as you can easily walk to staples of Soulard's night life such as McGurk's and Duke's! For the sports enthusiasts, you can easily catch shuttles to Blues and Cardinals games! If you have been looking for a new home that retains the charm of an older house, then the exposed brick, hardwood floors, and exterior architecture should be just what you're looking for! Schedule your tour today!

$399,000
3 Beds ⋅ 3 Baths ⋅ 22068443 MLS ⋅ ACTIVE UNDER CONTRACT Status
Stunning turn of the century Home in the heart of Soulard lovingly maintained is now ready for you to call it Home. Enter into original wood flooring, high ceilings, living room/dining combo, exposed brick and gorgeous oversized windows. This home has kept it's age true to charm. The main level rounds out with a sun filled eat in kitchen including all appliances and a 1/2 bath. From the kitchen you can head right out to your exquisite fenced in back yard that has a quintessential courtyard like setting with Gazebo, garden areas and 2 car garage with alley access. Second level offers Master bedroom with full bath and optional 2nd bedroom or office with a deck off the side overlooking backyard. 3rd floor boasts another bedroom/full bath and loft area. This home shares it's age elegantly with exposed brick, stained glass windows, claw foot tub, custom moldings, original hard wood and gorgeous exterior. New roof 2022! You must see this to appreciate. Call us today for your private tour.

$577,000
5 Beds ⋅ 4 Baths ⋅ 22065954 MLS ⋅ ACTIVE Status
Welcome to this Stunning Soulard home! Walkable to all of the wonderful amenities Soulard has to offer, this 5 bedroom, 4 bathroom home is sure to be a real crowd pleaser! As you enter the front door you will be blown away by the open floor plan! Spacious dining room flows right into the kitchen featuring loads of cabinet space, center island, stainless appliances, and quartz countertops! The living room offers tons of natural light and gas shiplapped fireplace! Master Bedroom Suite is bright and airy boasting a large walk in closet and full bathroom with double vanity, walk in shower, and soaker tub! 3 additional guest rooms and full bathroom round off the upper level. The lower level features an additional living space with electric fireplace, wet bar with marble countertops, full bathroom, and 5th bedroom! The real jaw dropper to this home is the rooftop with stunning views of Downtown St. Louis and the Arch! 2 car attached garage and fenced yard! Buyer to verify all MLS data.

$775,000
22061255 MLS ⋅ ACTIVE Status
This all brick, 7000+sqft 6 family in the heart of Soulard has a massive gated backyard and endless potential. All 6 units are currently rented, bringing in $6,476 in September (and rents are below market). AirBnB some or all 6 units for maximum cashflow (Soulard is the best STR area in STL). Renovate some or all units to increase property value + rents. Add off-street parking by taking from the backyard or turn the backyard into an oasis. All units have hardwood floors, soaring high ceilings & lovely historically accurate details throughout. There was a new roof put on in 2020, a concrete patio was added in 2022, ask about other recent upgrades. This property is less than a half mile from Anheuser Busch, 3 minutes to downtown, and walking distance to the numerous Soulard bars. There is an opportunity to add an ADDITIONAL UNIT in the attic- the last 3 pics. The adjacent lot is not included in this purchase but the sellers are open to selling/ packaging.

$315,000
22060204 MLS ⋅ ACTIVE Status
Welcome to the largest undeveloped lot in the heart of Soulard! Note the 65' of road frontage, 140' deep lot, and 8' brick wall across the building line. This land is also completely fenced in. Soil testing, and all abatement on the existing structure has been completed, and a full set of drawings including architectural and civil have been completed for three and two row houses. The signed and sealed set of drawings (see supplements) will be granted to the future owner for development and permit. This lot is zoned G commercial, with the potential to build residential, retail, or even both with commercial on the first floor and apartments above. The possibilities are endless, and the location is unbeatable! Duplicate listing of 22044657.

$2,295,000
22046882 MLS ⋅ ACTIVE Status
This sale includes 7 parcels. Please see attached flyer for more information This is an incredible investment/development opportunity in the highly sought after and historic Soulard neighborhood. Soulard has hundreds of new apartments being constructed. Home to some of STL’s most well-known bars and restaurants. The property is centrally located on 7th Street with great visibility, between the St. Louis Arch, Busch Stadium and AB-INBEV. Call today to learn more and set up a showing!

$315,000
22044657 MLS ⋅ ACTIVE Status
Welcome to the largest undeveloped lot in the heart of Soulard! Note the 65' of road frontage, 140' deep lot, and 8' brick wall across the building line. This land is also completely fenced in. Soil testing, and all abatement on the existing structure has been completed, and a full set of drawings including architectural and civil have been completed for three and two row houses. The signed and sealed set of drawings (see supplements) will be granted to the future owner for development and permit. This lot is zoned G commercial, with the potential to build residential, retail, or even both with commercial on the first floor and apartments above. The possibilities are endless, and the location is unbeatable!

$329,000
22040965 MLS ⋅ ACTIVE UNDER CONTRACT Status
ENDLESS POSSIBILITIES! Opportunity to own an amazing historic building in the heart of Soulard. Owned and updated by current owner, many updates have been made since 1992. With over 3,400 of open square footage on main and two upper levels, the possibilities are endless. This gem could be converted to an amazing residence, converted to office on main, with upper two levels converted to condo. A 1/2 bath serves main level. Usable and partially finished basement accessible from the main level. Currently, the main level is being used as a retail space and has three separate entrances - one on Russell/Menard/backyard. Access to the 2nd/3rd levels can be gained by a private rear entrance and through the main level. Newer insulated windows installed; newer roof; new copper and PVC plumbing which is run to the 2nd and 3rd levels. Dual HVAC units-one serving main/LL; other serving upper floors. Building was well insulated in 90s; $250 avg monthly electric bill. SOLD AS IS.

The BEST way to begin your search is to talk to an experienced buyer's agent with the Premier Team, but if you're just looking around, we hope our site is helpful!

Not only can the Premier Team set up custom MLS searches specifically tailored to your needs, our experience working with St Louis home buyers is an asset to a new home buyer.  There is no charge for MLS searches, or for working with a buyer's agent at Premier Realty Exclusive and the savings of time, energy and money are incredible.

Finding the best St Louis real estate deals takes hard work, experience and luck.  The chances of a home buyer finding a home for sale, recognizing the value, and negotiating all phases of the contract without a real estate professional would be tough.

Having enough time to search, having the real estate resources to find and recognize the value, and the network of other professionals to pull the deal together are things that Realtors develop and maintain over years of experience and hard work.

A buyer being able to "fall into" position to get the best price and other terms would be a feat.

The Premier Team recognizes this and works hard to be a top resource for St Louis home buyers.

Selling a home is equally difficult.  After years of home selling experience, the Premier Team has worked with hundreds of buyers and has recieved the buyer feedback of thousands more.

We bring this knowledge into every listing appointment to share with St Louis home sellers.

Home selling also takes daily marketing to place homes in front of home buyers and other buyer's agents to have the most impact.  A "For Sale" sign in the yard and an add in Sundays paper for a "by owner" sale rarely works, and getting the best price is virtually impossible.  Most often, a St Louis real estate professional is needed.