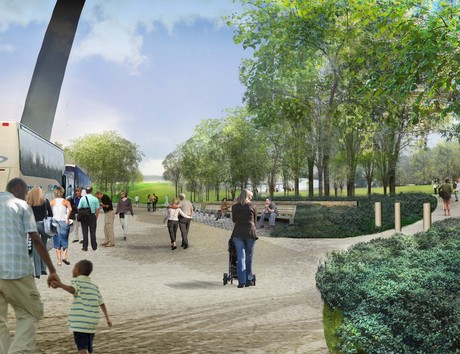 One of the great blessings of the St Louis area is a pleathora of parks that continues to grow and develop due to the popularity of these places and their use by the surrounding communities.  It has been said that the concept of setting aside natural landscapes for the pleasure and use of the general public began when New York when Central Park was created in 1853, or when Abraham Lincoln set aside land in the Yosemite Grant, but years earlier, the oldest park in St. Louis was set aside in 1836, then established by ordinance when the City of St Louis established Lafayette Square Park.  Ever since then, great effort and charity has existed in the St Louis area by the creation and maintenance of some of our wonderful park land and public spaces. In 1876, Forest Park was founded and shortly afterwars, the 1904 Worlds Fair and 1904 Summer Olympics brought the park into worldwide attention.    This page includes links to just a few of the better known parks in the area.

Owning homes in St. Louis within close proximity to one of these, or any other parks, is highly desireable, as proximity to recreational activities that parks provide benefits health, reduces stress, and increases real estate values.   Enough said

$399,900
3 Beds ⋅ 2 Baths ⋅ 22068413 MLS ⋅ COMING SOON Status
Well maintained with a long list of current owner improvements. Three floors of living area with a rare extremely clean and dry walkout lower level. Walk in from the covered front porch to find a comfortable living room with an updated gas fireplace. Separate dining is a perfect size for entertaining. Updated Kitchen is light-filled and allows access to the back deck and additional staircase to the second floor. Backyard offers privacy and a serene place to relax. Newer two car garage with lots of storage. Second floor has three bedrooms and a large updated bath. Primary bedroom has a large walk-in closet, big enough to be used as a nursery or converted into a bathroom. Third floor has potential for so many uses and has plumbing in place for an additional bath. High efficiency HVAC, Newer tankless water heater, Updated electrical and plumbing. Security alarm, ring cameras x4, Nest thermostat, Nest fire/CO2 monitors. washer/dryer, and kitchen appliances including microwave are included.

$449,900
4 Beds ⋅ 3 Baths ⋅ 22073959 MLS ⋅ ACTIVE Status
This Gorgeous Kirkwood Brick Ranch has been professionally renovated with a Fantastic Open floor plan! From the beautiful New Front Door to the New Flooring, Custom New Light fixtures and Crown Molding. New Custom Kitchen has Granite Counters, Stainless Steel Appliances and Large Center Island. Separate Dining Room and Large Living Room with Woodburning Fireplace. Split Bedroom floor plan with Master Bedroom Suite and 3 more bedrooms on main level, all with new carpeting. Gorgeous New Master Bath, Updated Full bath and a half bath. Laundry is on the Main floor and the lower level. Partially Finished LL with Family room and Bar area plus a bonus room for a bedroom, office or playroom. Relax on the nice patio, looking out to the large level backyard. Pretty Sunroom has new sliding door & windows. 2 car side entry garage enters off the side street. Lot is 115x150. Great central location, close to schools, parks, restaurants, all Kirkwood has to offer! Truly a wonderful place to call home!

$400,000
4 Beds ⋅ 4 Baths ⋅ 22073796 MLS ⋅ ACTIVE Status
Welcome to Shaw and Russell Boulevard. This delightful, quiet street is the perfect place to live your best life. When you love something you care for it and this home has heart. Full, front porch to enjoy hanging out with your neighbors. Great back deck to enjoy the outdoors with friends. The flow of the interior works so well with the foyer leading to a great, living room with formal dining that opens to the kitchen, half bath, and mudroom. 2nd floor features an amazing primary suite with a walk-in closet, deck, laundry, and private full bath as well as a family room and a great hall bath. Top floor features two more nice bedrooms. Lower level has an additional half bath, room to play, and space to work! Great private fenced yard with garage parking on a cul-de-sac street that ends at the Botanical Garden! Newer insulated windows, architectural shingle roof, 400 amp electrical box, new granite, nice appliances and more! I wish for you happiness in your journey home!

$299,900
4 Beds ⋅ 4 Baths ⋅ 22073408 MLS ⋅ ACTIVE Status
Welcome to this spacious 4 bedroom 3.5 bath home with a 2 car garage! The front porch was rebuilt from wood to composite & PVC materials. The A/C unit was replaced 4-5 years ago with an oversized unit & has been regularly maintained by Academy Air with no issues. A custom closet organizer was built for one of the kid's bedroom. Nest thermostat & a security system that allows control of the garage door & HVAC with your phone. The backyard is dog-and-cat-proofed along the fence so no escapes & is a perfect place to relax on a hammock. Neighborhood is very safe, pleasant, convenient, central located, economical, and practical urban living with a grocery store coming soon. Prime location with fishing, walking, biking, meditating, zoo, museums, concerts, snow days sliding fun on Art Hill — all in walking distance at Forest Park. You will also find an additional park out your front door, perfect for pets, kids, picnics in the gazebo, and sunbathing. Car is optional. Call this one home!

$425,000
4 Beds ⋅ 3 Baths ⋅ 22073245 MLS ⋅ ACTIVE UNDER CONTRACT Status
Original owner! Established in 1963, this home has wonderful living spaces! Open the front door to a home with a traditional lay-out. The living room is oversized with a jack and jill gas fireplace. The eat-in kitchen flows into a cozy back den with a bar. Open the den door to an outside patio. The garage is huge with two parking spaces and plenty of work spaces. Four bedroom upstairs WITH a Master Bedroom Suite. Please use a special sales contract. Seller to do no inspection requests. Home is being sold in ‘as is’ condition. The City of Sunset Hills has the passed occupancy permit. Walk to Powder Valley Nature Center! This home is located in a gorgeous, quiet neighborhood AND is also in the award winning Lindbergh School District!

$799,900
5 Beds ⋅ 3 Baths ⋅ 22071705 MLS ⋅ ACTIVE Status
Custom 2-story Home Under Construction, being built by Complete Care Residential and Commercial Services with a Total living space of 2601sqft. This home consists of 5 bedrooms, 3 full baths, and a 3-car tandem garage. The basement is unfinished, with rough-ins for a bathroom and wet bar and the option to be completed. Hardwood floors on the Main level and Carpet on the second level. Center island with granite countertops and stainless steel. Main Bedroom Suite has a shower, separate tub, and double vanity sink.

$279,900
3 Beds ⋅ 3 Baths ⋅ 22070742 MLS ⋅ ACTIVE Status
This home is ready for you and your family! Living Room is large with a wood burning fireplace and tons of light. The dining room opens into the kitchen space with breakfast area, sliding doors that lead to a covered patio/deck and fenced backyard. Upstairs the master bedroom is spacious, has an attached bathroom with walk in shower and a large walk in closet. Two other spacious bedrooms and a full hall bath complete the second floor. Basement is partially finished. Perfect home office, play space or man cave.

$875,000
5 Beds ⋅ 5 Baths ⋅ 22067957 MLS ⋅ ACTIVE Status
Gorgeous home in the Kirkwood school district! This 5-year-old 1.5-story home with a finished lower level offers 5 bedrooms and 4.5 baths. As you enter the home, you are greeted with natural light and wood floors throughout the main living areas. The great room has an open floor plan, vaulted ceilings, built-ins, and plenty of windows. The kitchen has 42-inch white cabinets, granite countertops, a large island & prep space, and a walk-in pantry. The patio door off the breakfast room walks out to the deck and fenced yard. The master bathroom offers a tub, separate shower, & large double vanity. The main floor is completed by a half bath & laundry room. Upstairs you will find 2 additional bedrooms, 2 full baths & closet space galore! The lower level has a family area with built-in bookcases, wet bar, beverage center, office with pocket doors, full bath, and an in-home gym. Enjoy an evening outside on the large deck overlooking the backyard. This home is perfect for your family!

$324,900
3 Beds ⋅ 3 Baths ⋅ 22065081 MLS ⋅ ACTIVE Status ⋅ Mason Green Condo 4 BLDG.
The seller is generously offering a $5k flooring allowance. Sought-after community in the heart of West County. Just a few feet from the Town and Country city limits, you will find this charming close-knit community. These villas rarely come up for sale. This large villa has a gated front courtyard with beautiful landscaping. Once entering you will find generously sized rooms, 3 bedrooms, and 3 full bathrooms!! From your kitchen, you can see beautiful trees. Have your coffee on the deck and watch the lake with a beautiful fountain and geese. You will feel as though you are in the country but yet you are minutes from all that West County has to offer. There is an oversized 2-car garage and plenty of room for entertaining. All new HVAC in 2021!! The original owner has lived here for 45 years. This won't last long.