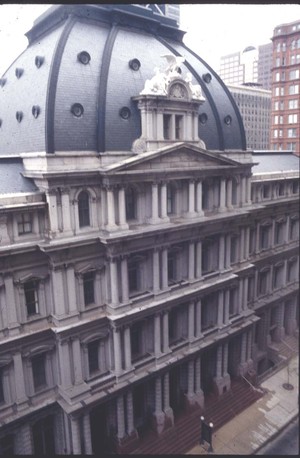 Built after the Civil War, the Old Post Office was opened for business March 15, 1884 and was actively used for over 100 years.  Part of the Downtown St Louis renaissance of the past decade was centered around the "Old Post Office District" and the fantastic restoration of that building.  Re-Opening Ceremonies were held exactly 122 years after the 1884 opening ceremony on March 15, 2006 to unveil a fully restored, fully rented structure with additional event space for rent.

What a gorgeous condo! Formerly the display unit that was used to help sellout the building, reap the benefits of a space that was professionally designed with impressive...

Area East of Jefferson, West of Tucker, South of Cass, North of Chouteau

Search by Price or Bedroom Count

have been active in the downtown St Louis real estate market, selling more lofts downtown than any other Realtors.  Many changes have taken place in the loft district since 2004, when the Premier Team took its first listing downtown.  At that time, very few Realtors that had worked in the loft district, many buyers purchased lofts were unassisted by professionals and cooperation from developers was limited.

We invite everyone to experience the excitement of downtown living and are happy to assist home buyers in checking out the area with the Premier Team!

Loft Living in Downtown St Louis or Luxury Condo Living puts the urban dweller steps from everything!  Downtown Living may not be for everyone, but for those looking for an exciting yet relaxed lifestyle, no yards to mow or gutters to clean, beautiful views, lots of friends and plenty of things to do, Downtown is the right fit!  Walk to the Cardinals game, spend a few hours in CityGarden, cheer on the Blues or catch a play at the Peabody:  there's too many attractions to mention!  Galleries, museums, cafe's and great new public spaces are taking over what used to be a deserted neighborhood.