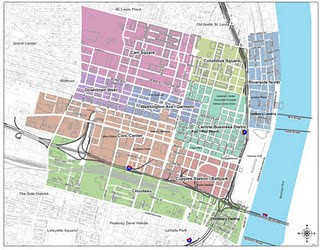 Downtown St Louis has undergone a tremendous renaissance in the past decade into a thriving destination for restaurants, cultural events, and significant residential growth.  Beginning in 1999 with the formation of Downtown NOW by then Mayor Clarence Harmon, plans were established to begin rebuilding Downtown with plans to address different regions of downtown.

The plans for development in the Downtown Now plan centered around 4 specific areas:

Downtown St Louis population has continued to grow by approximately 500 people per year, based on numbers published by the Partnership for Downtown St Louis. Current figures are that downtown population is 14,000 persons.  Demographic data for downtown also points to a more educated, professional, higher paid population as many of the lower rent apartments were cleared out and larger, newer spaces were rented and sold for a higher market rate.

Premier Realty Exclusive has been actively involved in the Downtown Renaissance by selling and reselling downtown lofts and condos since 2004, participating in Partnership for Downtown St Louis committees and subcommittees, participated in the Downtown St Louis Residents Association, participation in St Louis Association of Realtors Urban Affairs Committee, and maintaining membership in the St Louis Convention and Visitors Commission.  Premier Realty Exclusive represents buyers and sellers.  They have represented many individuals as well as a majority of the developers in the downtown area;  having represented CH2 Development, Loftworks,  McGowan Brother Development, Blue Urban, and currently representing  Sherman and Associates.  Premier Realty Exclusive has listed and sold in nearly almost every downtown loft or condo building.

For Downtown St Louis, visit our Downtown Homes Page or search below by building

Area East of Jefferson, West of Tucker, South of Cass, North of Chouteau

$215,000
2 Beds ⋅ 2 Baths ⋅ 23004510 MLS ⋅ ACTIVE Status ⋅ Packard Lofts BLDG.
Welcome home Unit #406 on the top floor of the Historic Packard Building, located one block from the new St Louis City Soccer Stadium, with amazing views of the Union Station Ferris Wheel and the beautiful Downtown Skyline. Enjoy all that Downtown Living has to offer. This Loft offers exposed brickwork and ductwork, 12 ft ceilings, concrete flooring throughout and huge windows with lots of natural light. The large living area is great for entertaining friends and family, preparing delicious meals or just sitting back and relaxing from a long day. This spacious loft has 2 large bedrooms with 2 full baths, main floor laundry and plenty of closet space. Unit includes one assigned parking space in the attached garage and a community storage room. It’s just steps away from public transportation, entertainment, shopping and restaurants. Don’t miss this great opportunity to live in the Historic Packard Lofts.

$85,000
2 Beds ⋅ 1 Baths ⋅ 23002559 MLS ⋅ ACTIVE Status ⋅ Blu Condo BLDG.
Sold As Is but Seller is willing to make minor repairs. Beautiful 2-bedroom condo located downtown. This condo features full height cabinets, granite counter tops & ss appliances. You will be ecstatic with the numerous cabinets and prep space in this stylish kitchen. Open floor plan with abundance of windows to provide natural light. The bedrooms are generously sized and have fabulous St. Louis Closet Co with tons of space. All appliances are to remain in the home, including the washer/dryer. Great community amenities for your enjoyment which include the outdoor patio with gas grills, stone fire pit, fitness center, Wi-Fi lounge, bike storage, personal storage lockers, doorman and the club room with a pool table, TVs, catering kitchen & media room. Unit has one gated parking spot. The location offers the full spectrum of downtown living with easy access to I-64 and other major highways! Beautiful views of Union Station and the Wheel! Three blocks from the new MLS Centene Stadium.

$149,000
2 Beds ⋅ 2 Baths ⋅ 23001344 MLS ⋅ ACTIVE Status ⋅ Ely Walker Condos BLDG.
Welcome to Ely Walker! This cozy, rustic loft offers an open floor plan with freshly painted walls, new doors, exposed brick and tons of natural light. Enjoy views of the city through your living room as you enjoy your morning cup of coffee. Equipped with two spacious bedrooms and bathrooms, large closets, and 1272 sq ft of living space. The kitchen is ready for all your cooking needs, with breakfast bar, granite countertops, wine cooler and matching black appliances. Unit comes with washer/dryer. Close to all the downtown amenities! Walk anywhere you want to go, including Union Station, Enterprise Center, the new soccer stadium, and Ballpark Village! A stones throw from Washington Ave night life. Enjoy covered, underground parking and a community of neighbors to mingle with at the rooftop deck and fitness center. Easy access to I44 and I64/40! Passed occupancy with the city acquired (in supplements). Don't miss this one!

$450,000
3 Beds ⋅ 2 Baths ⋅ 22079607 MLS ⋅ ACTIVE Status ⋅ International Bldg Condo BLDG.
*FEATURED PROPERTY ON ZILLOW GONE WILD* City Museum means a lot to many people. Own a piece of history that was retrofitted by the creator of the City Museum for his family. To Bob Cassily it was the culmination of a dream come true. This loft represents everything that was Bob. The loft has 3 BR 2 BA and nearly 2800 sq ft of living space. With wide open living and entertaining areas, this corner unit has large commercial-grade windows, spacious walk-in closets, custom showers/shelving in bathrooms- unique artifacts throughout that exude unsurpassed creative artistry. Looking for a unique 2nd BR with crawl-through a tunnel and cool play area? Then this is the loft for you. Custom interior windows add to the charm and uniqueness of this one-of-a-kind loft. City Museum attracts hundreds of thousands of visitors annually. Live in a top 50 Museum in America. Be sure and check out the article in the loft when viewing with even more descriptions of the fun you can have living at City Museum.

Downtown St Louis has a variety of home types, but mostly modern lofts and luxury condominiums and apartments with a very small number of single family homes.  Compared to most areas, Downtown Lofts & Condos are usually newer, more modern, and more affordable than other areas such as Clayton or the Central West End.

Loft types range from the "Soft Loft" which is mostly finished interiors with just elements of lofts like exposed duct work or pipes.  Buildings Downtown that are generally considered "soft lofts" are the Terra Cotta Lofts, The Annex Lofts, the Louderman Lofts and the Syndicate Condominiums.

The Industrial Loft is the other extreme from the soft loft.  Usually built in a former factory or industrial type building, the industrial has an edgy modern style with higher ceilings and more exposed elements of the building such as exposed brick, exposed piping and ductwork, exposed ceilings (timber or concrete usually), and usually concrete or distressed hardwood floors. Good examples of the industrial loft are the Banker's Lofts, Elder Shirt Lofts, 10th Street Lofts, Moon Brothers Carriage Lofts, the Lofts at 2020, and the Printer's Lofts.

Variations exist and some industrial lofts are more 'finished' than others based on the condition and style of the existing building or the developer's vision.

Some Condos don't qualify to be called 'lofts' at all.  There's no exposed ductwork, no exposed brick or electrical conduit.  Ceilings are finished with drywall and trim, just like a traditional home.  In Downtown St Louis, are usually high rises and mostly fall into the catagory of the LUXURY CONDO classification.  The Marquette Condominiums and Edison Condominiums are a great example.  There aren't any exposed features such as ducts, and the units are finished completely in an elegant, modern style.

The Downtown St Louis loft districts has some of the best preserved historic buildings available anywhere!

View the Page on the Left to:

have been active in the downtown St Louis real estate market, selling more lofts downtown than any other Realtors.

Many changes have taken place in the loft district since 2004, when the Premier Team took its first listing downtown.  At that time, very few Realtors that had worked in the loft district, many buyers purchased lofts were unassisted by professionals and cooperation from developers was limited.

We invite everyone to experience the excitement of downtown living and are happy to assist home buyers in checking out the area with the Premier Team!

Loft Living in Downtown St Louis or Luxury Condo Living puts the urban dweller steps from everything!  Downtown Living may not be for everyone, but for those looking for an exciting yet relaxed lifestyle, no yards to mow or gutters to clean, beautiful views, lots of friends and plenty of things to do, Downtown is the right fit!  Walk to the Cardinals game, spend a few hours in CityGarden, cheer on the Blues or catch a play at thePeabody:  there's too many attractions to mention!  Galleries, museums, cafe's and great new public spaces are taking over what used to be a deserted neighborhood.